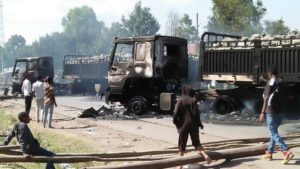 At least six people were killed and five others wounded in Ambo as Agazi forces of the regime used live fire to disperse protesters who blocked roads in and out of the town, situated 74 miles from the capital Addis Ababa. A source also told ESAT that five others were wounded.

Communications head with the city of Ambo, Gadisa Desalegn, however put the number of dead higher. He told the Deutsche Welle Amharic service that upto 10 people were killed and 20 others wounded. He blamed the Agazi forces for the killings.

The recent unrest began few days ago when a group of residents held up trucks loaded with sugar, hindering their progress outside Ambo and the nearby town of Guder. Sugar has become an expensive commodity in Ethiopia and residents of Ambo want their share. They blocked roads with rocks and tree logs. Two trucks were reportedly set on fire.

Latest information obtained by ESAT show that Agazi forces have shot their way through, cleared roads and took control of Ambo, a town seen as a symbol of defiance against the minority regime. Ambo has been the scene of unrelenting protests against the regime in the 2015/2016 anti-government protests across towns in the Oromo region in which hundreds civilians were shot and killed by Agazi forces.

Meanwhile, a source told ESAT that several weapons were seized from a resident of an operator of the TPLF in Metu town of Illubabor. The source said residents were already aware that Haile Kiros Gebru is a member of the TPLF and their search found that he has hidden 9 grenades, several rifles and shotguns as well as a military binocular.

Calm has been restored in Bedelle and Chora in Illubabor, south western Ethiopia, which has seen deadliest ethnic clashes last week. A dozen people were killed and several houses were set ablaze while thousands forced to leave their homes in what observers say was ethnic clashes instigated by operators of the TPLF hidden in the guise of anti-government protests.