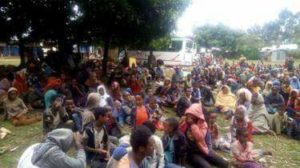 Information reaching ESAT show that dozens of people were killed over the weekend in south west Ethiopia when anti-government protests turned violent in Bedele and Chora, in Illubabor.

Several houses were set on fire and at least 5000 people were forced out of their homes and went to hiding in forests as attackers, some using machete, went on a killing spree, according to locals who spoke to ESAT.

A resident of Bedele told ESAT that the Amharas were targeted in the deadly attack that was perpetrated by the Oromos. He pleaded with authorities to intervene before the situation goes out of control. He accused that regional security forces and officials have failed to stop the attackers and save lives.

Residents contacted by ESAT say they could not tell the number of deaths but feared dozens have been killed in the ethnic motivated attacks.

Thousands of Amharas were made to settle in southern Ethiopia when famine hit northern Ethiopia 30 years ago. They have lived in harmony with the locals for decades but emphasis on ethnicity by the current regime have been blamed for tensions and resentment among various groups.

Meanwhile, federal authorities have been mum on the issue and have ao far not intervened to restore order, leading to speculation that the regime is complicit in recent developments of ethnic based attacks in Ethiopia.

A resident who spoke on the phone with ESAT said roads have been blocked and any Amhara trying to leave the region would risk their lives. He accused that the regional government and its security has done nothing to protect them and in fact has played down the magnitude of the attack in their media statements.