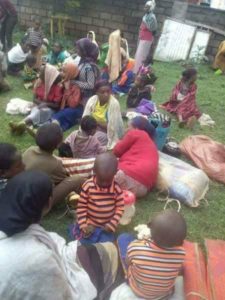 Amharas displaced in last week’s ethnic violence in South Western Ethiopia have called for help as local elders are working to restore peace and normalcy.

Several people were killed last week in Chora, Illubabor, in what the Amharas say was killings perpetrated by the Oromos. Close observers of the developments meanwhile accused that the ethnic violence was instigated by the operators of the ruling TPLF regime.

A representatives of the displace who spoke to ESAT from Abagura, where they found temporary shelter, said they needed assistance in food and other necessities.

He called on authorities to rebuild houses destroyed in the violence and for security forces to be deployed to prevent further violence.

Dozens of people were killed over the weekend in south west Ethiopia when anti-government protests turned violent in Bedele and Chora, in Illubabor.

Several houses were set on fire and thousands of people were displaced, according to locals who spoke to ESAT.