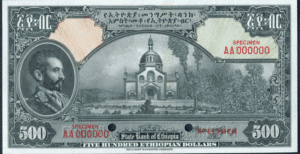 Ethiopia has devalued its currency, the Birr (ETB), by 15%. The dollar will be exchanged against 26.9 Birr effective tomorrow October 11, 2017, compared to the current 23.4 Birr, according to the National Bank of Ethiopia.

Speaking at a press conference in Addis Ababa, Vice Governor of NBE, Yohannes Ayalew said the move will help boost export trade which has been performing poorly in the last five years.

Speaking at the opening of Parliament on Monday, Ethiopian President Mulatu Teshome, who said the country is in serious financial crisis, announced plans to devalue currency to attract foreign investment and close the gap in foreign trade.

He said his government is faced with a serious shortage of hard currency and export trade has dwindled in last three years.

The last devaluation was made seven years ago and the World Bank as well as the International Monetary Fund have been pushing for further devaluation of the Birr to improve export trade.

Critics say further devaluation the birr would shoot the price of food even higher, increase transportation fares and rent, affecting those in retirement and those who live paycheck to paycheck.