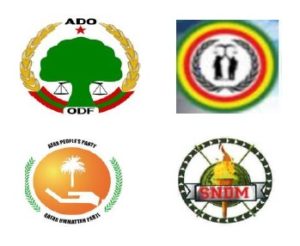 The Council of representatives of the Ethiopian National Movement calls upon all stakeholders to work together to bring an end
to the authoritarian rule of TPLF.

In a statement issued at the end of a three-day meeting which assessed Ethiopia’s current political, economic, and security situation,
the Ethiopian National Movement said it is gravely concerned by the current developments in the country “buoyed by the determination of the Ethiopian people in general and the Oromo in particular to see to it that TPLF’s tyrannical rule soon meet its inevitable demise.”

“While gravely concerned by the developments, we are While acknowledging that for almost three years the sustained peaceful popular uprisings in most parts of the country unequivocally rejected the TPLF regime and demanded a fundamental change, we also realize that there has been some awakening among the constituent parties making up the
ruling EPRDF coalition. We welcome this development and encourage their move towards firmly standing in solidarity with the demands of their respective populations for rule of law, justice, and freedom in Ethiopia. It has to be noted here however that ours and the people’s overriding objective is to make sure that TPLF is the last dictatorship ruling Ethiopia.”

The statement further said “It is evident that the challenges faced by the country and the gravity of the situation requires an all-inclusive, collective, and responsible response before the country plunges into further chaos. To this effect, ENM reaffirms that it shall work proactively and collaboratively with all stakeholders to ensure that the brave popular resistance being waged in Oromia and all parts of the country led to the triumph of freedom over tyranny and victory for the Ethiopian people.”

The Movement said it “confidently declare readiness and resolve to lead the Ethiopian people’s struggle.”

The ENM call upon the members of the national army and security apparatus to “side with, protect, and defend the oppressed people of Ethiopia and bring a quick end to extrajudicial killings, torture,
imprisonment, and disappearances of pro-democracy activists and the unnecessary loss of innocent lives.”