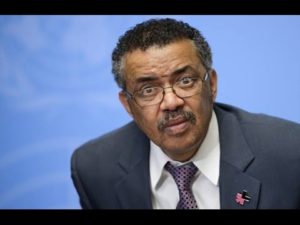 A change.org campaign calls for the resignation of Dr. Tedros Adhanom from his post as the WHO Director General. The campaign warns if Dr. Tedros fails to resign on his own terms, a world wide campaign will be launched to ask governments to revoke his mandate.

“Your recent decision to nominate Mr. Mugabe disqualifies you entirely, totally, completely and unequivocally to hold the respected role of General Director of WHO. You should resign,” said the petition that was started by
Francois Girard a resident of Paris in France.
“You have lost all credibility and authority needed to lead WHO and you have brought disgrace to this honourable organisation. You should resign.If you do not want to resign we will launch a worldwide petition to ask our governments to revoke your mandate,”

On wednesday a columnist for the World Politics Review and a regular CNN.com opinion contributor, Frida Ghitis, said in an opinion published in the Washington Post that Dr. Tedros’ judgement was in question when he nominated Robert Mugabe as a goodwill ambassador for Non-Communicable Diseases.

Urging Dr. Tedros to resign from his post, Ghitis said Dr. Tedros’ actions should be investigated to see if the “appointment to a brutal human rights violator was the result of corruption.”

Earlier in the week, UN Watch called for a “full, independent and international inquiry into any possible deals made between the WHO chief—Ethiopia’s former foreign minister—and Zimbabwe’s ruler.”