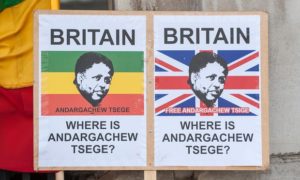 Two British legal professional associations urge the Secretary of State for Foreign and Commonwealth Affairs, Boris Johnson, to call for the release of Andargachew Tsige, an opposition figure in death row in Ethiopia.

The president of the Law Society, Joe Egan, and the chair of the Bar Council, Andrew Langdon QC, have written to the foreign secretary to ask him to intervene more forcefully in the case of Andargachew Tsege, The Guardian reported on Tuesday.

According to the report Johnson Johnson however has said he will “not interfere in the legal systems of other countries” and that calling for his release would not “be helpful at this stage”.

Andy Tsege, a Briton, was abducted in Yemen in 2014 and was handed over to the Ethiopian regime, which had earlier sentenced him to death.

The letter to Johnson from Egan and Langdon says they are very concerned about the situation of Tsege, who is “unlawfully detained on death row”.

“He was hooded, shackled and rendered at night to Ethiopia where he was held incommunicado for over 50 days and has been detained ever since,” the letter continues.

“Andy has suffered extreme abuses at the hands of the Ethiopian government, from kidnap to torture to an unlawful death sentence imposed for his political views while he was living with his family in London,” said Maya Foa, the director of Reprieve, which is campaigning for Tsege’s freedom.

“By failing to secure Andy’s return to his partner and three children in the the UK, Boris Johnson is failing to stand up for British values and the rights of a vulnerable British citizen,” his partner, Yemi Hailemariam said.

“The foreign secretary has shown real disinterest in the flagrant ill-treatment of a British citizen over a long period of many months and years,” The Guardian quoted Ben Cooper, the barrister who represents Tsege as saying.