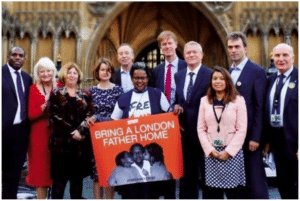 Urging his government to get the release of Andargachew Tsige, an Ethiopian born British citizen on death row in Ethiopia, British International Development Secretary, Andrew Mitchell, said he is “confident a solution can be found to get Andy home to his partner and three children in London by Christmas.”

In a commentary published in the Evening Standard of London Andrew Mitchell writes that he is confident that a “solution can be found to get Andy home to his partner and three children in London by Christmas.”

A critic and opponent of the TPLF regime in Ethiopia, Andargachew Tsige was kidnapped at a Yemeni airport in June 2014 and rendered to TPLF security. He was sentenced to death in absentia in 2009 on trumped up terrorism charges.

“Inside the front cover of my passport, I am always reassured to read that the UK Government offers me “such assistance and protection as may be necessary” when I leave British shores. But I am reminded by one case in particular that protection is not always guaranteed. The Ethiopian government has been holding a British father from Islington, Andy Tsege, on death row for more than three years and our leaders have so far failed to get him home,” writes International Development Secretary.

He went on to say that Rory Stewart, Minister of State for Africa and Boris Johnson, the Foreign Secretary along with Andy’s many supporters, “should be able to do a deal with the Ethiopian government to secure Andy’s return. It might not be an easy deal to strike, but it can’t be as hard as the bitter reality that if nothing is done, once again his children will be forced to endure another Christmas without their father.”

“The only way to ensure Mr. Tsege’s safety and wellbeing is for the UK to urgently seek Mr Tsege’s return home to London. We urge you to reconsider your priorities in Mr. Tsege’s case, and to negotiate his return to the UK,” the joint letter says.