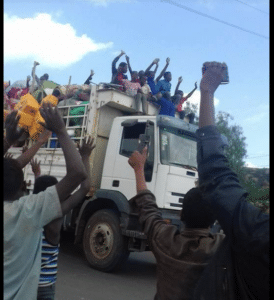 Reports reaching ESAT from Eastern Ethiopia say about 10,000 Oromos displaced from Somaliland and the Ethiopian Somali Region were headed to Harar and Eastern Hararghe. It brings the total number of people displaced so far close to 80,000.

Trucks loaded with the displaced have began arriving in Harar and Hamaresa today.

Ethnic violence in Eastern Ethiopia has resulted in the death of hundreds of people as confirmed by the spokesperson of the regime on Tuesday.

Spokesperson of the regime Negeri Lencho told reporters in Addis Ababa that hundreds of Oromos were killed but said he did not have a number as to how many Somalis were killed.

“We can say hundreds of the Oromo ethnicity were killed. There were also deaths from the Somali side, we don’t know exactly how many,” Negeri said at a press conference.

Close observers of the crises blame security forces of the regime for having a hand in the death and displacement of ethnic Oromos and Somalis in the violence that was sparked by a dispute over control of land and resources along the area bordering the two ethnic groups.