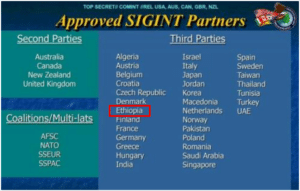 The U.S. National Security Agency (NSA) has built “clandestine eavesdropping outposts designed to listen in on the communications of Ethiopians and their neighbors across the Horn of Africa in the name of counterterrorism,” according to an investigative report by The Intercept, a news organization that covers national security, international affairs, technology and criminal justice among others.

The Intercept, which on Wednesday published classified U.S. documents, disclosed that the National Security Agency forged a relationship with the Ethiopian government that has expanded exponentially over the years. “The NSA provided the East African nation with technology and training integral to electronic surveillance,” the report said.

“In February 2002, the NSA set up the Deployed Signals Intelligence Operations Center – also known as ‘Lion’s Pride’– in Ethiopia’s capital, Addis Ababa, according to secret documents obtained by The Intercept from the whistleblower Edward Snowden.”

“The Ethiopian government uses surveillance not only to fight terrorism and crime, but as a key tactic in its abusive efforts to silence dissenting voices in-country,” the report quoted Felix Horne, a senior researcher for Human Rights Watch. “Essentially anyone that opposes or expresses dissent against the government is considered to be an ‘anti-peace element’ or a ‘terrorist.’”

Lion’s pride began with 12 Ethiopians performing a single mission at 12 workstations. “But by 2005, the operation had evolved into eight U.S. military personnel and 103 Ethiopians, working at “46 multifunctional workstations,” eavesdropping on communications in Somalia, Sudan, and Yemen.

Lion’s Pride then expanded to Gondar and Dire Dawa. “The state of the art antenna field surrounded by camels and donkey-drawn carts is a sight to behold,” reads the NSA file.

According to the report Lion’s Pride had produced “almost 7,700 transcripts and more than 900 reports based on its regional spying effort.”

Ther report indicated that the U.S. had spent 20 million dollars in just four years from the time the Lion’s Pride was set up till Ethiopian troops set their boots in Somalia in 2006.

“While the exact nature of U.S. support for Ethiopian surveillance efforts in the Ogaden region is not clear, it is very troubling to hear the U.S. is providing surveillance capacities to a government that is committing such egregious human rights abuses in that region,” says Horne, the Human Rights Watch researcher. “Between 2007-2008 the Ethiopian army committed possible war crimes and crimes against humanity against civilians in this region during its conflict with the Ogaden National Liberation Front.”

The report concluded with a note by Felix Horne who said: “Governments that provide Ethiopia with surveillance capabilities that are being used to suppress lawful expressions of dissent risk complicity in abuses. The United States should come clean about its role in surveillance in the Horn of Africa and should have policies in place to ensure Ethiopia is not using information gleaned from surveillance to crack down on legitimate expressions of dissent inside Ethiopia.”