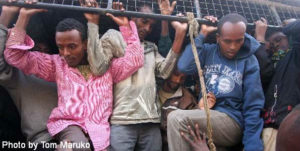 Kenyan police say they have arrested 60 Ethiopian immigrants from a residential estate in Nairobi.

According to a report by the Xinhua News Agency, Kenyan security officers said the Ethiopians were found hiding in a house at Mihang’o area in Kayole, east of capital city.

The report said the Ethiopians were being fed with bread and shared toilets that was unsanitary. Police were probing to establish how the Ethiopians entered the country.

Ethiopian immigrants use Kenya as a transit country to South Africa and even Europe in search of better economic opportunities and flee political persecution.

Kenyan police last week arrested 13 other Ethiopians from a house in Nairobi.