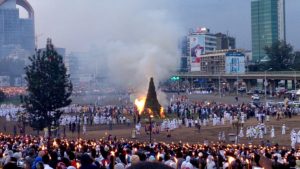 Ethiopian and Eritrean followers of the Orthodox Church today colorfully celebrated Meskel, the discovery of the True Cross.

The celebration began on the eve Tuesday with the burning of bonfires, known as Demera, as the choir sang religious hymns praising the day, the cross and the creator.

In Ethiopia’s capital Addis Ababa and Eritrea’s Asmara as well as in towns and villages across the two countries, thousands of the laity and the clergy gathered adorned with traditional and religious costumes giving color to the occasion as bonfires and candles lit the night.

Ethiopians and Eritreans in the Diaspora have also gathered at their respective churches to celebrate the day.

Feasting on traditional cuisines today has been postponed as followers of the Orthodox Church avoid meat and dairy on Wednesdays and Fridays.