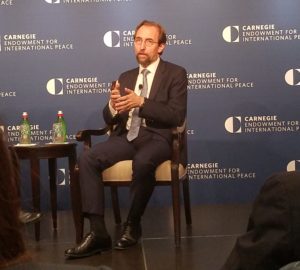 The UN High Commissioner for Human Rights said today that unless there is opening up of the political space in Ethiopia, the country is doomed to fail.

Zeid Ra’ad Al Hussein was speaking in Washington, DC to members of the press and the human rights community, where he recalled that his team of human rights experts had been denied access by the Ethiopian regime following the deadly protests in 2015/2016 in which hundreds of protesters were shot and killed by the regime’s security forces.

The High commissioner hoped he and his experts would be given access when he visits the country again in January 2018.

He warned that unless the country opens up the political space and allow people to openly exercise their rights, the country risks a serious crises.

“Unless there was an opening of the system and the ability for people to exercise civil and political rights more openly, the country was in peril,” Zeid Ra’ad Al Hussein said.

Al Hussein said he would form “a more conclusive opinion and picture” about the country after his trip in January.

The Ethiopian regime had refused demands by the High Commissioner and other rights watchdogs for an independent investigation into the killings of hundreds of anti government protesters in 2015 and 2016.