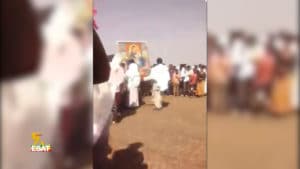 Several residents of Debre Tabor in Gondar who protested the detention of a church leader were shot and injured as security forces opened fire at an impromptu protest rally. Information reaching ESAT say several people including priests were also detained.

The priest, Aba Berhan, was arrested twice for protesting the installation of a telecommunication tower at the premise of his church.

Residents who heard the arrest of the priest for the second time were heading to their church with some carrying the cross when security forces opened fire.

ESAT sources say those who sustained injuries were admitted to the local hospital.

The sources also say the whereabout of the priest is not known.