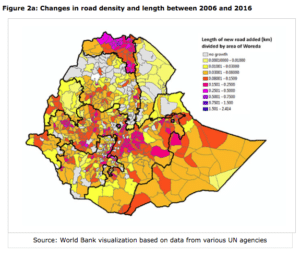 Overarching policy solutions are needed to address spatial inequalities in development in Ethiopia, according to a study conducted by World Bank experts.

In a three-part study document on spatial distribution and its implications for inclusive development in Ethiopia over the next five years, World Bank experts backed up their findings with data on development inequalities in Ethiopia and suggested solutions to address the ever widening gap between the haves and the have nots.

Expanding productivity in the agricultural sector, more connective infrastructure to increase market access for farmers, increased distribution and managed urbanization are keys to close spatial inequalities, according to a study by Michael Geiger and co-authored by Priyanka Kanth.

“Access to land and land rental markets are key determinants in improving agricultural productivity, and an important policy issue in Ethiopia,” according to the authors.

“Road infrastructure is a major, but not the only, constraint to market access. Although the national roads network in Ethiopia quadrupled in size from 1997 to 2015, road density in Ethiopia remains the lowest in Africa, while poverty rates increase by 7 percent with every 10 kilometers of distance from a market town.” according to the study.

The study also says Ethiopia need to focus on smaller and secondary cities as the study shows the only rapidly growing city is Mekele, home to the TPLF oligarchy, at the helm of power for over a quarter century. 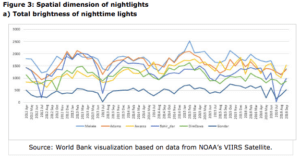 In a three-part study document, World Bank experts also show that road density and electricity have increased and concentrated in Mekele, Tigray while regions such as Amhara region, described in the study as “economically lagging region” have shown lesser progress.

These smaller, secondary cities need to be at the forefront of the rural-urban transition, and for that, more labor-intensive industries will be needed by them to increase the possibility of more balanced, spatially inclusive growth.”