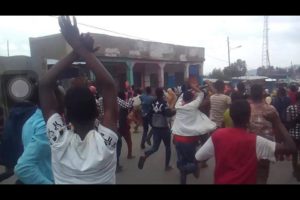 At least a dozen of people have reportedly been killed in Eastern Ethiopia as violence continues on Wednesday and hundreds of Oromos forced to leave the Somali region.

Deder and Aweday are two towns that have seen the deadliest so far since new waves of violence began on Monday following an ongoing border dispute between the Somali and Oromo communities in Eastern Ethiopia.

Meanwhile hundreds of Oromos have left the Somali region and took shelter in Harar and Babile towns as well as at a military command post in the area.

Reports reaching ESAT show the Somali Special Police Forces and the Agazi Forces of the regime have perpetrated the killings. The Oromo Police Force have reportedly shot at protesters in Babile town.

Ethiopian government spokesperson, Negeri Lencho confirmed the death of “several people” but declined to give numbers. Speaking to journalists in Addis Ababa the spokesperson said the situation was calm today. But information received by ESAT show several people were killed today and protest demonstrations have continued in several towns in Eastern Ethiopia.