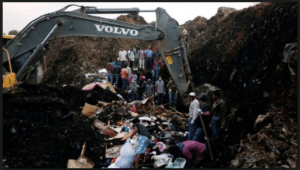 A landfill landslide in the outskirt of the capital Addis Ababa on Thursday
killed at least one person.

A witness told ESAT that up to four people are feared dead and several others wounded when the pile of trash collapsed for the second time in a year.

In March over 130 people were killed and about the same number were left without shelter. Among the dead were squatters who live off the garbage, eating leftover food and salvaging items.

The landfill site has become a threat to those dwelling near by as it continues to be the only dumping ground for a city of more than 4 million residents.

Over 3 million dollars has been raised to support survivors of the last landslide but most of that money did not reach the survivors, according to reports.