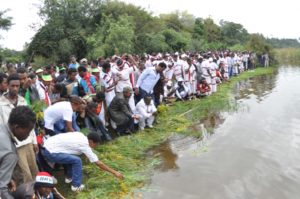 The Council of Aba Gedas, the cultural and religious leaders of the Oromos, has banned government officials from delivering speeches at this year’s Irreecha festival due to take place Sunday October 1, 2017, according to a report by the BBC Amharic.

Hundreds were killed and injured at last year’s Irreecha, a festival to welcome the harvest season as security forces shot at festival goers and in the ensuing stampede. Most had lost their lives trapped in a ravine as they run for their lives.

The Human Rights Watch said it found evidence that security forces of the regime “not only triggered the stampede that caused many deaths but subsequently shot and killed some members of the crowd.”

In a report released in connection with the one year anniversary of the death of hundreds of festival goers in Bishoftu, a.k.a Debre Zeit, outside the capital Addis Ababa, the rights watchdog said witnesses saw security forces in plainclothes shooting at people.

The regional government has said security forces will not be allowed near the festival this coming Sunday.