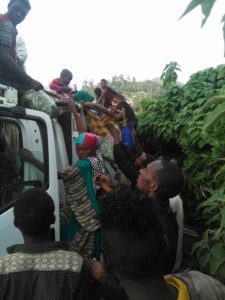 Photo of the displaced obtained from social media

The ethnic violence in Eastern Ethiopia continued with new reports showing further killings and the displacement of over 70,000 people.

Ethiopia’s government spokesperson, Negeri Lencho, confirmed the number of the displaced to China’s Xinhua news agency and said the hot spot areas are now being manned by regime’s army and the situation has calmed down. Separate reports coming out of the region however show that fighting has still continued on Tuesday resulting in the death of several people.

There has been a long standing turf dispute between the Somali and Oromo communities in Eastern Ethiopia with the regime being accused of arming both sides and not intervening in time once the killings began.

There have also been reports of fighting between two clans with in the Somali community in Chinaksen in which 5 people were killed and 6 injured. The reports also say the Somali Special Police Force, which is said to be controlled by the TPLF, had been involved in the deadly clashes between the Geri and Jarso clans.

Reports also show that fighting broke out between the Somali Region Special Police and the Guji in Bale. Several people are feared dead.

On Monday, a truck carrying the displaced from the Somali region and heading to Harar overturned killing 6 people and sending 3 others to the hospital.