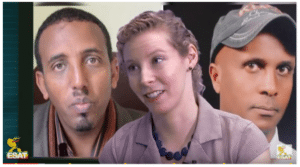 The legal director of an international advocacy group has said that Ethiopia’s political prisoners like journalist Eskinder Nega and Andualem Aragie are not terrorists but victims of “kangaroo courts” and unjust laws designed to criminalize fundamental rights.

Kate Barth, Legal Director of Freedom Now and international advocate for Eskinder Nega and Andualem Aragie, told ESAT that the courts, as well as laws such as the anti-terror proclamation, are unjust and unacceptable by any standard.

“The Ethiopian courts aren’t simply independent or unbiased bodies. That is, in fact, one of the arguments we made in some of our legal filings with the international tribunals. In the specific case of Mr. Nega and Mr. Andualem’s case, there was literally no evidence produced at trial,” she said.

Barth called the anti-terrorism law a “total joke” used to criminalize dissent. “Terrorism is a favorite trick of Ethiopia to say that its critics are effectively undermining the government, which is crazy as we all have the right to free speech. Ethiopia has signed numerous international treaties promising to give its citizens the right to free speech and simply criticizing governments does not make you a terrorist,” Barth noted.

The legal director pointed out that UN Working Group on Arbitrary Detention has already found the continued detention of journalist and blogger Eskinder Nega a violation of international law. UN panel of five independent experts from four continents concluded that the government violated Eskinder’s fundamental rights to free expression and due process. The UN Working Group called for his immediate release in 2013.

According to the American lawyer, the public speech and articles produced as evidence of terrorism at the trial of Eskinder and Andualem were laughable. “No reasonable, independent and unbiased court anywhere in the world would say yes these men are terrorists,” she said.

Barth also accused the regime of torturing political prisoners to force confessions.
She indicated that torture is being used against prisoners of conscience to obtain confessions but the judges illegally allow such evidence without any questions.

She urged the US government to reconsider its allegiance with the TPLf-led oppressive regime that violates the fundamental rights of citizens. “The people of Ethiopia are in the streets and up in arms because their rights are being repressed.”

Barth underlined that the support of the U.S. government to the oppressive regime, prioritizing security concerns over human rights, is a serious miscalculation that needs to be reviewed.

She also called on the regime to free all political prisoner as repression and violence worsen political instability. “Your position cannot be secure while you badly mistreat your own citizens. You just will continue this cycle of violence and instability.”

“The only way for you to create a secure, peaceful and prosperous Ethiopia is going to be to change the trajectory of the country and respect the individual’s rights. A great way to start that would be to free all political prisoners,” the director said.