Ethiopia is a dictatorship and the regime knows no bounds: says a congressman 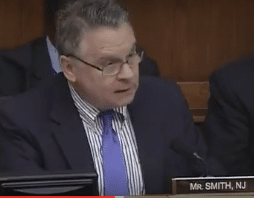 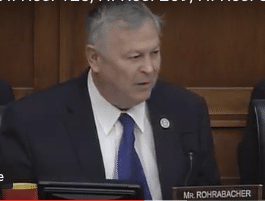 A U.S. congressman says the murder, repression and torture that is perpetrated by the Ethiopian regime is offensive to the American values. Dana Rohrabacher, who represents California’s 48th congressional district said the regime in Ethiopia “arrogantly expects the U.S. to continue good relationships with it and perhaps expect to get some type of aid.”

Rohrabacher was speaking at a hearing today on HR – 128, a resolution for “supporting respect for human rights and encouraging inclusive governance in Ethiopia.”

“This is a corrupt regime that is oppressive and brutal to its own people. Its corruption spills beyond its borders,” Rohrabacher said of the regime in Ethiopia. “What we have is a dictatorship that knows no bounds.”

Sponsor of the bill, Representative Chris Smith from New Jersey said on his part that the resolution is “like a mirror held up to the government of Ethiopia how others see them and intended to encourage them to move on reforms.”

Smith cited a report put out by the Department of State that documented arbitrary arrest, killings and torture committed by security forces. Restrictions on freedom of expression, freedom of association, politically motivated trials, harassment and intimidation of opposition members and journalists. “The report is like an indictment of the government of Ethiopia,” Smith said. “The continued human rights violations are absolutely unacceptable.”

Speaking on his experience with victims of the Ethiopian regime, Representative Smith said he recently sent a letter to the US Citizenship and Immigration Services on behalf of Demissew Abebe to get his family humanitarian parole to come to the US. Smith said Demissew is a world class track star who is tortured by the Ethiopian security forces in a way to make him unable to run. “They tortured him on his feet, so he couldn’t run anymore. That is so despicable,” Smith said.

Smith also spoke about Aba Guya, a person with disabilities and former head of the Ethiopian Association for Persons with Disabilities. “When he refused to join the ruling party he was jailed, made to crawl around his cell without his wheelchair and subsequent to his imprisonment, he was left in a forest without a wheelchair to die.”

HR – 128 resolution, among others, calls for the Ethiopian regime to investigate the killings and excessive use of force against protesters in the Oromia and Amhara regions; and the release dissidents, activists, and journalists who have been detained en masse for exercising constitutionally guaranteed rights.

Sponsor of the bill, Representative Chris Smith, presented markups on the bill, which is so far cosponsored by 56 representatives (40 democrats and 16 republicans).

The resolution, which condemns the killing of peaceful protesters and excessive use of force by Ethiopian security forces, also called for the Ethiopian regime to hold accountable those responsible for killing, torturing, and detaining innocent civilians who exercised their constitutional rights.

The resolution passed the House Foreign Affairs Committee without objection and will be tabled to the full House for a vote.