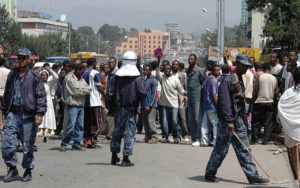 The Ethiopian Advocacy Network (EAN) said it has submitted a letter to the 35th Session of the UN Human Rights Council urging members to support a draft resolution which, among others, condemn human rights violations, extrajudicial killings and use of the anti-terror as well as the charities and societies proclamation to attack civic society and the press.

The draft resolution which was introduced last week and entitled “Situation of Human Rights in Ethiopia,” demands the United Nations High Commissioner for Human Rights to urgently organize and dispatch a mission of independent experts to Ethiopia to investigate the killing of hundreds of protesters in the Amhara and Oromo regions in 2015 and 2016.

The letter by the EAN also strongly urges the members of the United Nations Human Rights Council to “support the resolution to send a bold message to Ethiopia to stop hiding its horrific human rights record from international scrutiny.”

“As a member of both the Human Rights Council and the Security Council, it’s imperative for Ethiopia to cooperate fully and to allow access to an international, independent, impartial UN team to conduct a transparent investigation into the use of lethal force that has resulted in the death of peaceful protesters to avert further social and political unrest,” EAN said in a statement.

The Ethiopian regime has rejected several calls by rights groups and UN bodies for an independent investigation into the loss of lives and injuries to hundreds of peaceful protestors.