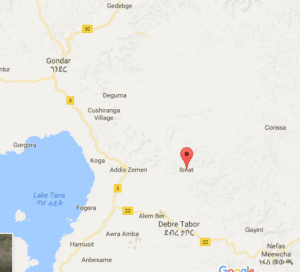 An armed group says its forces have attacked a temporary army command post in Ebnat, north Gondar killing the commander.

Patriotic Ginbot 7, an armed group fighting the Ethiopian regime, said in a statement it sent to ESAT that several other people might have been dead in the attack that was carried out in the early hours on Monday.

Gunfire could be heard in the area for several hours following the bomb attack by the group. A person who spoke to ESAT from the area says the deceased, who goes by his first name, Awoke, was heading the command post that was set up to squash the anti-regime sentiment in north Gondar.

The leader of PG7, Prof. Berhanu Nega, who is travelling in Europe to meet his supporters, confirmed that his forces have escalated their attack against regime targets in North Gondar.

Meanwhile, undisclosed number of prisoners have reportedly escaped from the Bahir Dar Penitentiary.

A source who spoke to ESAT from Bahir Dar said the prisoners have escaped following a shootout with guards. The source said arms might have been smuggled into the prison that houses about 3000 inmates.