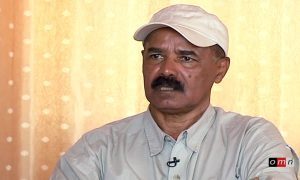 The uprising by the Oromo people have exposed the reality in Ethiopia and has challenged the myth that the regime was a formidable force, Eritrean President Isaias Afeworki said.

“The concealed reality in Ethiopia was revealed by the Oromo uprising. The uprising challenged what is considered formidable. The myth that the Woyanes were formidable was demystified,” Afeworki said in an exclusive interview with the Oromo Media Network (OMN).

He said the uprising was the culmination of events in Ethiopia. “The protest was an explosion that has been brewing for the last two decades in Ethiopia. Politically all the myth about federal democratic republic is exposed. It is game over. You have to surrender to reality,” Afeworki said.

He said the TPLF, or the Woyanes, as he would like to call them, have always seen the people of Oromo, or any other group for that matter, as a threat.

Economically, the President said, the Woyanes are a Kleptocracy. “It is a small group. It is a gang. It is a kleptocracy who have come to control the economy in Ethiopia. The Woyanes are not representatives of Tigrayans. The perception that Tigrayans are benefitting is not true,” he argued.

Afeworki who said the future requires a vision, recommends that Ethiopia needs to go through a transition. “There has to be a transition in which everybody is involved.”