Ethiopians celebrate the victory of Adwa 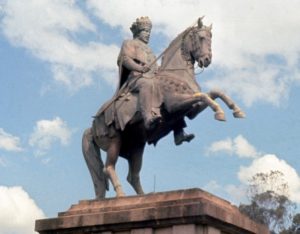 The 121 anniversary of the victory of Adwa was colorfully celebrated on Wednesday by Ethiopians at home and in the Diaspora.

The victory in 1896 by the Ethiopians over the invading colonial forces of Italy goes down in history as a major setback to the European colonizers, who at the Berlin conference carved up the entire Africa.

Italy, a late comer to the European scramble over Africa, had conquered Eritrea and part of Somalia but sought to expand its colonial territory by conquering Ethiopia.

The Ethiopians, led by Emperor Menelik and his wife Tayitu, had decisively defeated the Italians led by General Oreste Baratieri in a war that culminated at the battle of Adwa, in northern Ethiopia.

The defeat of the Italians at the hands of Ethiopians has been a subject of many books and researches. It is also a source of pride by Africans as well as black people around the globe who had sought to draw inspiration from the victory of Adwa to extricate themselves from slavery and colonial exploitation.

“Italy’s terrible defeat,” writes The New York Times in its headline on March 4, 1896.