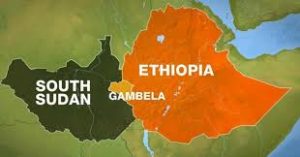 A UN multi-agency team that visited the Gambella region in February said at least 3,714 have been displaced following the cross border attack by the Murle ethnic group from South Sudan.

The UN Office for the Coordination of Humanitarian Affairs said successive cross-border attacks by the South Sudanese Murle ethnic group in July and January last year and in February led to displacements and deaths.

“At least 3,714 people (743 households) are reportedly displaced, the majority taking shelter in Ongoi Town and Alemi and Thoo localities. The displaced people have been living and sharing food with their relatives around, seeking urgent food and emergency shelter and non-food items support, as well as access to clean water and other social services,” the report by UNOCHA said.

“Given past trends, the cross-border attacks and the consequent deaths, displacement and cattle raiding are expected to continue until the onset of the rainy season in March when road access will be impaired,” according to the delegation.