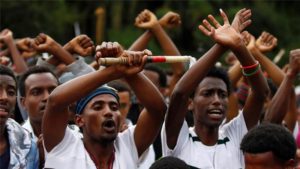 Five thousand of the over twenty-thousand protesters detained en mass under Ethiopia’s state of emergency would be brought to court.

The “command post” charged with overseeing the martial law disclosed that 26,130 people were detained at the height of the protest last summer in the Oromo and Amhara regions of Ethiopia. It said about 20,000 have been released following what it called “rehabilitation training programs.”

According to state media, the command post said 4,996 people would be brought to court for allegedly taking part in the protests.

The regime is expected to announce on Thursday if the martial law would continue to be the law of the land. Speaking to the parliament, titular Prime Minister Hailemariam Desalegn has given indications last week that the country would stay under the state of emergency.

Rights groups decry the state of emergency citing extrajudicial arrests and killing as well as rampant abuse of power it gave to security forces who act with impunity.