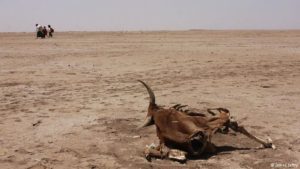 A former member of the Ethiopian parliament representing the Somali region says over 20 people have died in just two weeks in one district alone due to a mysterious epidemic, on top of the cholera and worsening effects of drought.

Jamal Khalif told ESAT that 90% of the cattle have died due to the severe drought in the region. He warns that if there is no rain in the next 10 days, the situation in Somali region would turn into a serious humanitarian crises.

The UN and aid agencies have been warning that the drought in the region is just one stage away from a full blown famine. The Ethiopian regime says some 40,000 cattle have perished in the region.

Khalif says he thinks the epidemic is due to the fact that the dead cattle have not been buried properly.

He also accused that the Ethiopian regime is using food aid as a political tool and that military camps in the region have been turned into prisons where dissidents are being tortured.