Ethiopia: Over 300 die of cholera epidemic 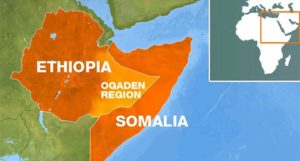 More than 300 people are feared dead due to cholera outbreak in Ogaden, in the far eastern region of Ethiopia.

The Ogaden National Liberation Front (ONLF) said in a statement that with no health facility in most of the region, the lives of thousands is at risk.

“Although the majority of the towns in Ogaden are affected, the disease is creating havoc in the rural areas, with no health facilities or emergency provisions,” the ONLF said in an appeal to the international community.

The Front said that since November 2016, over 2000 people are estimated to have died in remote areas of Ogaden due to the scourge.

The Front accused that the Ethiopian regime has imposed an undeclared embargo on aid and access for NGOs and the media to the Ogaden region.

The ONLF is fighting for the independence of the Ogaden. The Ethiopian regime is accused of perpetrating what amounts to genocide and crimes against humanity in the region as documented by international rights groups.