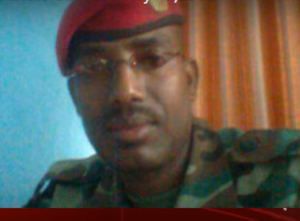 A sergeant who deserted the Ethiopian army exposes corruption by TPLF army generals at UN Mission to Somalia. He alleges that the generals siphon off salaries of the Ethiopian mission in Somalia under UNSOM.

In an exclusive interview with ESAT sergeant Hailemichael Bewketu Gashaye said he was sent to Somalia in 2015 as part of the peacekeeping force with the rank of a major but was only paid as a sergeant. He alleges that he was paid only 40% of what the UN sent him as a salary.

He said the TPLF generals forge paperwork and submit to the UN claiming members of the Ethiopian Mission had higher ranks but only pay the soldiers a fraction of what the UN sends them.

Sergeant Hailemichael said the 50,000 dollars given to each family of deceased soldiers never reached families but instead is siphoned off by the generals. He gave names of the generals he alleges had embezzled the UN money sent to Ethiopian soldiers. The sergeant accused that brigadier general Mohamed Ayzenu, brigadier general Gebremedhin Fekadu, brigadier general Yohannes and colonel Yemane Gebremichael were involved in siphoning off the UN funds.

The sergeant said he left the army due to the corruption, nepotism and favoritism