Ethiopia: one killed, 18 injured in a grenade attack in Gondar 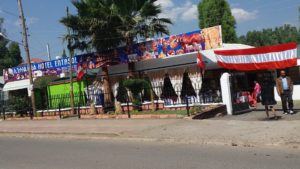 Police said one person was killed and 18 others wounded after a grenade was thrown on Tuesday into the Entasol Hotel in Gondar town.

Eyewitnesses say the deceased was a student at the University of Gondar. Police put the number of injured at 18 but witnesses told ESAT the victims were 2 wait staff and 3 customers.

The injured were being treated at the Gondar Referral Hospital. There is fears that the death toll could be higher as some of the victims sustained serious injuries.

The regional police say it is searching for the perpetrators.

Tuesday’s grenade attack was the second in a week in the Amhara region where anti-government sentiments run high.

At least 400 people were killed in anti-government protests this past summer as security forces shot at peaceful protesters .