Ethiopia: New round of mass arrest in Oromo, Amhara regions 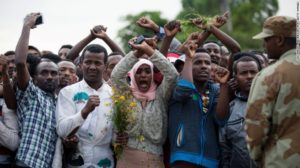 Security forces have arrested several youth in the Oromo and Amhara regions of Ethiopia in a new round of crackdown on anti-government protesters last summer, according to ESAT’s sources.

Security forces targeted the youth in Adama, Guji, and Borena zones in the Oromo region. Protesters in Gondar and Awi zones were also targeted in the weekend arrests.

The latest campaign of arrests came only two weeks after the regime released over 10,000 detainees.

The detainees were targeted for allegedly attacking regime supporters in the protests last summer in the Oromo and Amhara regions. The sources said security forces were still searching for the youth and were also offering bribes for tips leading to the arrest of protesters.

Prime Minister Hailemariam Desalegn meanwhile gave indications on Monday that the six month state of emergency declared in October could be extended.

At least 1,500 people were killed and 60,000 detained in a yearlong protests mainly in the Amhara and Oromo regions.