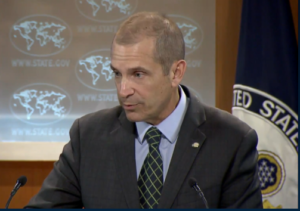 The United States says the Ethiopian regime is using the martial law it declared in October to silence dissent.

Deputy spokesperson for the United States Department of State Mark Toner said on Thursday that the arrest of Dr. Merara Gudina, Chairman of the Oromo Federalist Congress, was “yet another example of increasing restrictions on independent voices in Ethiopia.”

Toner went on to say that the arrest of Gudina upon his return from Europe, where he spoke against the tyrannical regime in his country in a testimony at the European Parliament, “further reinforces our view that Ethiopia’s declared state of emergency is perhaps being used to silence dissent and deny the constitutionally protected rights of Ethiopia’s citizens.”

Dr. Gudina was arrested in Addis Ababa upon his return from Europe following a campaign by the state affiliated media for his arrest saying  he had violated the martial law when he testified against the regime along with Prof. Berahnu Nega, the leader of Patriotic Ginbot 7, an armed group fighting the regime. PG7 is outlawed by the iron fist government that doesn’t allow independent political organizations, which are a threats to its rule.