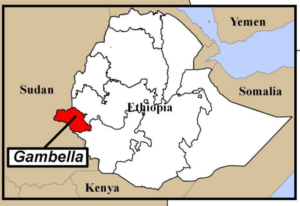 Over one thousand Tigrayan businessmen who were widely accused of taking over land for agriculture in Gambella, displacing the locals, complain of lack of additional loans from the Development Bank.

The Tigrayan dominated government in Ethiopia has been a subject of scathing criticism at an international level for favoring Tigrayans who took large tracts of land and resources in the name of development. Gambella is in one of the naturally fertile regions in Ethiopia whose indigenous people have faced displacement to make way for local and foreign investors aligned to the ruling Tigrian elite.

A representative of the Tigrayan investors in Gambella, Yemane Seyfu told reporters that it was “just a coincidence that Tigrayans were the majority who took land in Gambella.”

The Development bank of Ethiopia meanwhile said it is investigating cases where multiple loans were issued on a single plot of land.

A study published in 2011 on land giveaway by in Ethiopia by Dr. Aklog Birara show no land was slated in Tigray for investment but 1.8 million hectares of land is allocated for investment in the rest of Ethiopia of which the major investors are the Saudi Star, four Indian firms and one Chinese firm.

A total of 5.4 million acres of land was a given to foreign investors in Afar, Amhara, Beni-Shangul, Gambella, Oromia, Somali and South Ethiopia regions, according to the study.

“To make way for agricultural investment, and through its so-called villagization program, the Ethiopian government has forcibly displaced hundreds of thousands of indigenous people from their lands. This relocation process has destroyed livelihoods. It has rendered small-scale farmers and pastoralist communities dependent on food aid and fearful for their own survival,” the Oakland Institute said in its last detail report on land giveaway in Gambella.

“Ethiopian officials have also beaten, arrested, and intimidated individuals who have refused to comply with relocation policies. These actions are in direct contravention of Ethiopia’s obligations under international human rights law.”