Ethiopia: Sixty hectares of sugar plantation goes up in flames 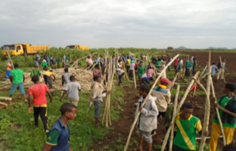 Sixty hectares of sugar plantation belonging to the business empire of the ruling party went up in flames in Jawi, Gojam.

The cause of the fire that gutted the plantation owned by the Metals and Engineering Corporation (METEC) is under investigation, according to reliable sources.

There have been speculations by locals that the fire might have been started by people who were displaced by the project to vent their anger against the government.

The sugar factory and the plantation have displaced hundreds of locals against their will.

This is the second time that sugar plantation at the project was set on fire. The first was deliberately done to get rid of the plantation as the factory was not ready for production of sugar.