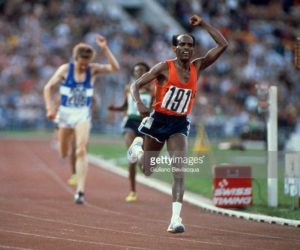 Miruts Yifter, two-time Olympic gold medalist and a runner who earned the nicknames “the gear shifter” and “yifter the shifter” for his fast dash at the last rounds of competitions, died in Canada at the age of 72.

Mituts has been an idol and a mentor for athletes who followed his footsteps, the likes of Haile Gebreselassie winner of two olympic gold medals and several titles and Derartu Tulu, another legendary athlete and Olympian.

The family said the athletes’ body will be sent to Ethiopia, where it is expected receive a heroic welcome and public funeral.

Born in 1944 in Adigrat, Tigray, Miruts left his country in 1997, unhappy about the misguided policies of the ethnocentric regime and rampant human rights violations.

In a 1997 article in the New York Times, the olympic star said ”throughout my life I was running for the people of Ethiopia and for my beloved flag,” Yifter said. ”The reason I have left my country is that people who were educated, people who had every kind of talent, because of their ethnic background, the Government has removed them. They have been fired. These people I have seen them on the street with their kids begging. So I don’t get peace of mind. The Government is unfair.”

Mituts told the Times that his only crime was he had refused to endorse  the ethnic discrimination policies of the government.

The legend is survived by his wife and seven children.