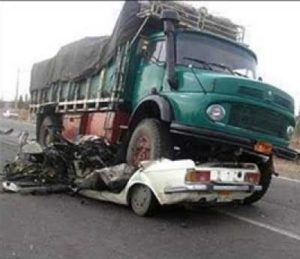 A minibus full of passengers collided with a dump truck in Bora, 100 miles south of the capital Addis Ababa resulting in the death of all 14 passengers including the driver.

The minibus was traveling from Batu town to Addis Ababa when it was involved in a head on collision with the dump truck heading the opposite direction.

The driver of the dump truck who has reportedly escaped the accident unscathed is under police custody for investigations, local media  reported quoting police.

Four thousand people have lost their lives in traffic accidents last year, according to data obtained from the Ministry of Transport. The World Health Organization says Ethiopia has a higher rate of accident considering the few number of vehicles. The country of over 90 million people has only 700,000 vehicles.

Age of the vehicles and drunk driving were listed as two of the reasons for the deadly crashes in the country, according to the Ministry.