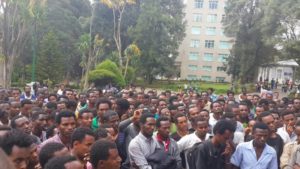 Protesters in Ambo, west of the capital Addis Ababa, demanded Wednesday for the release of leaders of opposition political parties and students whom they said were unjustly imprisoned by the regime. Residents of Ambo staged the protest rally defying the state of emergency that bans any demonstrations against the regime.

Students of the Ambo Secondary School took to the streets on Wednesday demanding the release of their compatriots and leaders of the Oromo Federalist Congress Dr. Merara Gudina, Bekele Gerba and other prisoners of conscience.

A resident who spoke to ESAT on the phone said he had seen several soldiers moving into the town.

The protesters demanded that those responsible for the loss of life and injuries to peaceful protesters be brought to justice.

While the regime announced the release of thousands of prisoners, security forces are arresting the youth in several localities in the Oromo and Amhara regions, according to sources.