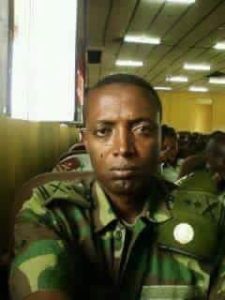 The 19th bench of the federal high court in Addis Ababa on Tuesday presided over the case of Colonel Demeke Zewdu and et al, who are leaders and members of a committee that spearheads the demands of the people of Wolkait, Tsegede and Telemt.

The defendants lead the demand by the people of north Gondar to reclaim their land that was illegally incorporated into Tigray region when the Tigrayan-led regime took power 25 years ago.

The prosecutor accused the defendants of taking missions from Patriotic Ginbot 7 to destabilize the country. They were also accused of killing and abduction of local officials in Gondar and Tigray.

Five defendants appeared before the court on Tuesday but the Colonel, considered by many as the leader of the uprising and resistance in the Amhara region, remain at the Angereb prison in Gondar. Several attempts by regime security forces to bring him to Addis Ababa failed due to resistance by the people and the Amhara police. Six of the defendants are held at the Central Investigation prison in Addis Ababa, while nine are held in Gondar.

They are also accused of causing damages to property worth over 20 million dollars in Gondar and Gojam.

The court is adjourned to January 12, 2017 as per the request by the prosecutor for further investigations.