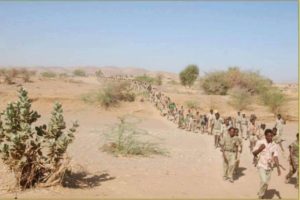 Patriotic Ginbot 7, a group fighting the Ethiopian government, said 46 soldiers have deserted the regime army and joined the resistance movement.

The soldiers, who defected after a marathon negotiations and joined Patriotic Ginbot 7, have defected with various weapons including 9 artilleries, 6 snipers and RPGs among others, according to a source on the ground with the fighters.

The defectors have vowed to  fight alongside PG7 to remove the tyrannical regime.

The source also added that PG7 is now providing training to new recruits and defectors inside Ethiopia, not in Eritrea as the regime alleges.

PG7 have been claiming to have caused considerable damages to regime forces in recent fights in northern Ethiopia.