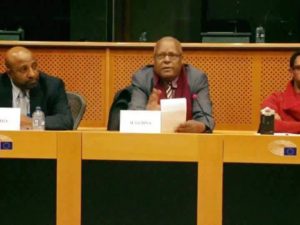 Dr. Merara Gudina, Chairman of the Oromo Federalist Congress was arrested upon his arrival from Europe.

Gudina was in Brussels where he testified at the European Parliament on the current political crises in Ethiopia and the gross human rights violations being perpetrated against ordinary Ethiopians.

Upon the invitation of the European parliament, Gudina, Prof. Berhanu Nega of Patriotic Ginbot 7 and athlete Feyisa Lilesa were in Brussels last week to testify against the dictatorial regime in Ethiopia.

According to ESAT sources, Gudina and four members of his family were arrested by members of the command post that is in charge of the state of emergency declared by the regime early in October.

Speaking at the European Parliament Merara Gudina called for the rubber stamp parliament in Addis Ababa to be dissolved and for the establishment of a transitional government.

Media outlets affiliated with the regime were viciously campaigning for his arrest saying Gudina has violated the state of emergency by attending the hearing at the European parliament with Prof. Berhanu Nega, the leader of Patriotic Ginbot 7, an armed group fighting the regime in northern Ethiopia.