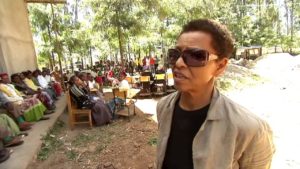 Women in Ethiopia live under constant fear of violence, illness, hunger and poverty but they are now also facing a new threat – human trafficking, according to veteran women’s rights campaigner Bogaletch Gebre.

A third of its 99 million citizens still survive on less than $1.90 a day – the World Bank’s measure of extreme poverty.

Girls are often regarded as a financial burden on their families in the Horn of Africa country long blighted by cycles of disease, drought, hunger and conflict, and expected to drop out of school to get married or find employment, according to a report by Reuters.

“When a child is born a girl in Ethiopia … she is born into servitude. She is literally there to serve the family,” Gebre said, as she recalled growing up in the 1960s in Kembatta, southern Ethiopia. “It’s a tragedy.”

In the past decade, human traffickers have increasingly lured girls away from their schools and homes in poor, rural areas with the promise of jobs and other opportunities in cities like the capital Addis Ababa, Gebre said.

But many ended up being exploited as maids and sex workers.

Because prostitution is taboo in Ethiopia, especially in the rural areas where most of the trafficked girls come from, many find themselves ostracized if they return, the report said.

“An abducted girl can never return home. She is considered damaged goods,” Gebre told the Thomson Reuters Foundation in the office of the charity she founded in 1997 – Kembatti Mentti Gezzimma (KMG), which translates as Kembatta Women Standing Together.

Reuters quoted a U.S. State Department’s 2016 Trafficking in Persons report which found that girls as young as eight were working in brothels around Addis Ababa’s central market.

But more than 400,000 Ethiopians are still estimated to be trapped in slavery, according to the 2016 Global Slavery Index by human rights group Walk Free Foundation.