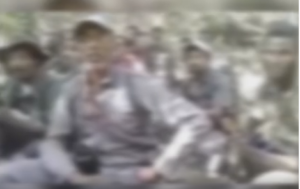 A leader of a self organized armed group says Ethiopians have no option other than waging armed struggle to free themselves from the TPLF’s brutal misrule.

Gobe Melke, in an exclusive interview with ESAT, said his forces have engaged regime forces last week and inflicted major damage in Northern Ethiopia in a gun battle that lasted for five hours.

Melke said his group works in tandem with Patriotic Ginbot 7, an armed group operating from its base in Eritrea. PG7’s military companies operating inside Ethiopia have also been fighting regime forces in recent months.

A spokesperson for PG7 confirmed that the two forces cooperate in their fight against TPLF. Head of political affairs and spokesperson for the group Mengistu Woldeselassie also confirmed to the Voice of America that PG7 had last week engaged regime forces in Gondar where one of its military commanders have reportedly killed himself instead of surrendering.

News of the death the commander, Maj. Mesafint Tigabu, continued to take the headlines in the Ethiopian media with the Ethiopian regime claiming its forces killed him and others in a fight and arrested dozens while PG7 said the senior commander shot and killed himself to avoid falling in the hands of his enemies.

Melke’s interview refuted claims that Gobe’s forces only represent and fight for the freedom of the Amhara. Melke said his group is fighting to free Ethiopia of the tyrannical regime and would work with any group that has the resolve to fight the regime.

Ethiopian regime officials continue to give contradictory statements on the widening conflicts in the northern part of the country. The regime initially denied any fight was underway with freedom fighters in northern Ethiopia but the state media later in the week said “some elements sent by arch foe Eritrea were defeated and that Maj. Tigabu was killed in the fight.”

The spokesperson for PG7 says that the regime is pandering lies as part of its desperate propaganda ploy.