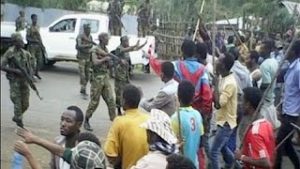 Amid a year long popular uprising that led to the declaration of a state of emergency in early October, the regime in Ethiopia had created secrete concentration camps at various corners of the country where tens of thousands of innocent citizens have been detained.

ESAT’s sources revealed that the regime had created secrete concentration camps and torture dungeons in places like Awash Arba, a police training facility in Oromo region and the Alage Agricultural College, which was an orphanage during the reign of Mengistu Hailemariam.

Upto 30,000 people have been arrested since the martial law was put in effect in early October the sources said. The detention of the citizens in remote and inaccessible secrete areas and denying family visitation was a deliberate act to inflict psychological trauma on the detainees, the sources added.

A recent report by Merara Gudina, Chairman of the Oromo Federalist Congress at the European Parliament put the number of people arrested in the country at 60,000 while over 1,500 were shot and killed by regime’s security forces in the last one year of public protest against the brutal regime.

Meanwhile, two journalists who are critical of the regime and a former member of an opposition political party were detained over the weekend.

Journalists Elias Gebru, Anania Sory and Daniel Shibeshi, a former leading member of the now defunct Unity for Democracy and Justice (Andinet) were arrested by regime security operatives on Friday.