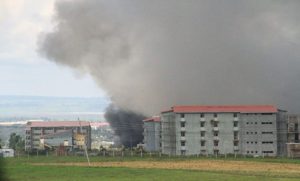 In a surprise twist of alleged miscarriage of justice in Ethiopia, regime prosecutors charged jailed political prisoners for the arson at the notorious Qilinto prison in August that killed dozens of inmates.

The charge alleged that 38 prisoners were responsible for the death of 23 inmates in the fire. It said the accused have beaten the victims leaving them to die in the fire. The charge contradicts earlier accounts by the government that the victims had died of smoke inhalation.

The Ethiopian Human Rights Project based in Washington, DC put the number of people killed at 67 of which 45 died of gunshot wounds.

The charge by the regime prosecutors also accused the 38 prisoners of being members of political parties and have allegedly been engaged in recruiting inmates for membership to join the Oromo Liberation Front, Patriotic Ginbot 7, which are outlawed by the tyrannical regime, as well as Al Shabaab.

The charge said the inmates deliberately started the fire to execute the mission by the outlawed political parties. The charge further said the accused were raising funds from abroad and inside the country to execute their mission.

The charge however did not say how inmates at a maximum security prison could at the same time carry out a mission by political groups.

The majority of the prisoners are former members of legally registered political parties in the country.

A guard on duty at the Qilinto prison told the media in August that security forces were shooting at the prisoners following the start of the fire.

Families of the deceased who spoke to ESAT in August said the bodies of their loved ones were riddled with bullets and authorities have warned them against disclosing the manner of the death.