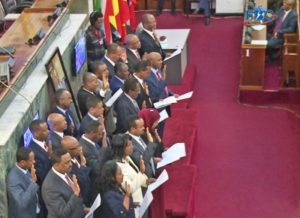 Ethiopian Prime Minister Hailemariam Desalegn on Tuesday reshuffles his cabinet in a move many see as an attempt to calm the growing protest against a minority tyranny.

The nominal prime minister presented the list of 30 key positions and their ministers, which the rubber stamp parliament endorsed without any challenge.

The move came after a yearlong deadly uprising against the minority Tigrayan government in which all key positions were held by the Tigrayan clique. The posts of military and security as well as intelligence are still controlled by the Tigrayans.

The not-so-popular foreign minister, Tedros Adhanom, was replaced by Workineh Gebyehu Negeo, listed in official documents as an Oromo, but known to be a Tigrayan, who have dropped his last name, Woldekidan, in the last election to pass as an Oromo, according to a fascinating book written by Merara Gudina, an Oromo opposition leader. The University of South Africa, where he did his PhD, listed his last name as Woldekidan.

Adhanom is eying the top position of the WHO but his campaign has faced opposition from Ethiopians all over the world who accuse the former malaria researcher of corruption and association with a ruthless regime.

Of the 30 ministers, 9 have survived the reshuffle and would continue in the new cabinet. The 21 new cabinet ministers have served at several high key positions and ministries.

Early in October, the regime declared a six month state of emergency after a yearlong protest in which security forces killed at least 700 people, by estimates of local political parties.