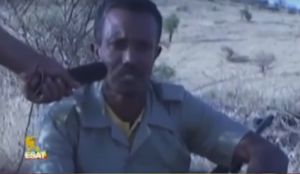 A high ranking military commander for Patriotic Ginbot 7 killed himself when his team was surrounded by the enemy forces in a fight in north Gondar on Wednesday.

The Major, also affectionately called Gebriye, was one of the respected commanders of Patriotic Ginbot 7 military companies that left their base in Eritrea to engage enemy forces inside Ethiopia. His guerilla team on Wednesday came under attack by heavily mechanized forces of the regime in Armachiho, north Gondar, in a place called Abderafi.

Major Mesafint Tigabu was a former member of the regime army but having seen the country’s defense force was riddled with corruption and favoritism, not to mention the gross human rights violations the minority regime perpetrates, he left the country and lived in exile in Luxembourg.

He joined Patriotic Ginbot 7 forces a few years ago to fight the tyrannical regime in Ethiopia.

PG7 forces have been on the offensive against regime forces in recent months in north Gondar and reportedly caused considerable damage to the regime army.