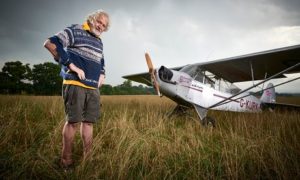 An attempt by a hardy group of adventurers to fly the length of Africa in vintage planes is back on course after they were stranded for two days in Ethiopia, where the authorities had accused them of illegally entering the country’s airspace, the Guardian reported on Friday.

The newspaper reported that diplomats from the UK, Ireland and the US were involved in the release of the group of about 40 people, who were held in a small airport in the west of Ethiopia. Their planes are expected to head to Kenya on Friday.

Among the stranded was Maurice Kirk from Bristol, a veteran of such scrapes. He was once arrested for landing a plane at George W Bush’s Texas ranch, and was held on another occasion after crashing in Japan.

The head of the Ethiopian Civil Aviation Authority, told the Associated Press on Thursday that the pilots entered Ethiopian airspace illegally and were under investigation.

The pilots of some 20 vintage airplanes have been released after two days of  detention by Ethiopian authorities and are able to continue their flights down the African continent.

The Vintage Air Rally bills itself as a “flying rally across Africa, from Crete to Cape Town,” for planes built in the early 20th century.