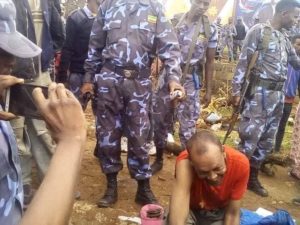 The person allegedly caught carrying a bomb in a demonstration in Addis Ababa [Photo: social media]

Asked to confirm reports by residents that the number of people killed in the weekend attack in Burayu was 25, Police Commissioner, Zeinu Jemal told reporters that the number could be much higher. He said his department was still gathering information to come up with the exact number of deaths.

The killings in Burayu and other localities in the outskirts of the capital Addis Ababa took place following Saturday’s welcoming rally in Addis Ababa’s central Meskel Square for leaders of the Oromo Liberation Front (OLF), an Oromo armed group that was based in exile in Eritrea.

News of the attacks were first reported as the Oromo youth group, known as the Qeerroo, were returning to their districts after the rally in the capital and passing through Burayu and other towns bordering the city. Several residents and activists allege that the Qeerroos attacked the Dorzes and other ethnic groups from southern Ethiopia. But the allegations were quickly denied by Oromo activists and police said today that the killings were perpetrated “in the name of two political parties” and the perpetrators were given orders from a single command post. The commissioner did not mention the parties by name.

Commissioner Jamal also said the perpetrators had received payments from the “two parties” and that they were deliberately trying to incite ethnic violence. He said they were heard hurling ethnic slurs at their targets. The alleged perpetrators went to Burayu from Addis Ababa and from other places in the Oromo region and vehicles they have used have been impounded, according to Zeinu Jamal. He said upto 400 people in Burayu and 300 in Addis Ababa have been arrested in connection with the violence.

Thousands of residents of Burayu and other areas who flee the attack have been sheltered in schools and churches, reports indicate.

Meanwhile, a demonstration held today in the capital to denounce the killings in Burayu turned deadly as police shot and killed five people.

“The individuals have snatched weapon from a police officer. Other officers had to use deadly force to protect themselves,” according to the police commissioner. Several people were also injured.

Demonstrators in Addis Ababa also caught a person with a grenade and handed over to security forces. Video shared on social media show a group of youth handing over a grenade and the alleged person to police, who quickly put him on their pick up truck.

Residents of Arba Minch, southern Ethiopia also staged a similar demonstration denouncing the killing of their compatriots in Burayu.