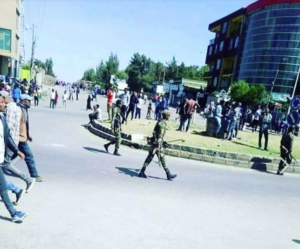 A resident from Majete town in the Amhara region told ESAT that they had buried 15 people killed over the weekend by armed groups claiming to be soldiers for the Oromo Liberation Front (OLF).

Regional officials meanwhile said today that calm has been restored in all towns after a weekend that saw the loss of several lives and injuries in attack by the OLF.

It began in Kemise, a town in Wollo and a pocket in the Amhara region that is also home to the Oromos.

No definite explanations could be obtained as to how the clashes were sparked and which party was responsible for igniting the deadly incident but local officials on the Amhara side accused that the OLF soldiers, armed with machine guns went on a killing spree in Majete, Kemise and Ataye.

Exact figures of the dead could not be established.

Head of security for North Shewa administration, Kassahun Embiale told the regional mass media agency that soldiers of the OLF were responsible for the deadly attack, looting and kidnapping of women and children.

Deputy head of security for the Amhara region, Colonel Alebel Amare told ESAT that the situation in the towns has been brought under control after a joint operation by regional and federal forces. The Colonel decline to put figures on the number of casualties but said lives were lost and some have sustained injuries in the attack. Damages were also done to properties in the armed attack.

The OLF army said in a statement last week that it had broken up from the party and its leadership based in Addis Ababa, according to The Reporter, an English weekly published in Addis Ababa.

The party is meanwhile in the process of registering with the National Electoral Board to take part in the next elections slated for May 2020.

The national Security Council with the Office of the Prime Minister said in a statement yesterday that regional and federal forces have been instructed to take measures to restore peace in the region and protect the security of citizens.